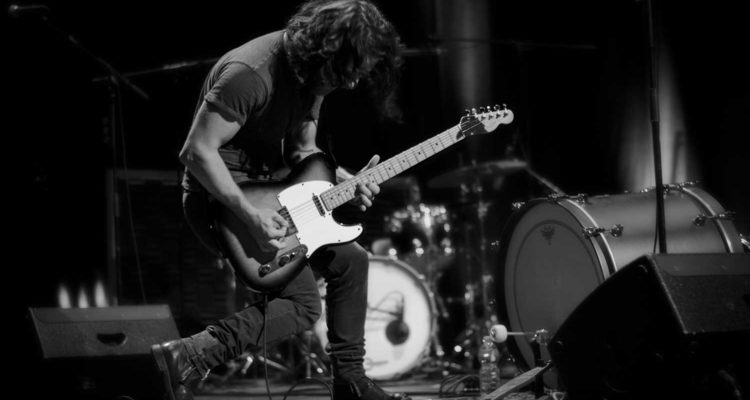 Andrea Bignasca was born and raised in the south of Switzerland, near Lugano, on the 29th August 1988, to a teacher and a physiotherapist. The approach to music came early on, when at the age of 7 he started taking drums lessons. At the age of 17, after 10 years of drumming, he vacated his drum stool, put aside his drum sticks, took a few steps to the front of the stage, dedicating himself to guitar playing and singing as an autodidact. Soon afterwards, he founded Vermillion Rouge in 2005 alongside Luca Tonellotto and Alberto Paganini. The rock trio, for which Andrea Bignasca sang, played and composed all the songs, received recognition regionally and on a national level, having also played in Zurich, Lausanne, Fribourg and Northern Italy. The value of the project has since been confirmed in various occasions, as Vermillion Rouge ranked second in the competition “Palco ai Giovani” in Lugano and reached the final at ROCK HIGHWAY CONTEST (Zürich at Alte Kaserne) twice.

As music started to become more than mere outbursts of teenage passion, Andrea Bignasca, in 2012, began performing as a solo artist. In 2013 he opened for Larry Carlton at the Estival Jazz Nights in Lugano, and in 2014 he reached the main stage of the main event, Estival Jazz in Piazza Riforma, Lugano, playing after Gregory Porter and opening for Morcheeba. In 2014 he won the jury, the public voting and the 1st prize at the main music contest in Ticino, Palco ai Giovani. Raised bilingually in an Italian- and German-speaking environment, Andrea Bignasca writes and sings in English, being convinced that the music demands it. He has currently finished working on his first studio album (Gone, 2015, Radicalis Music Management – Sony), having secured, amongst many, collaborations with Omar Hakim (drummer), Phill Brown (mixing engineer) and Dave Collins (mastering engineer).